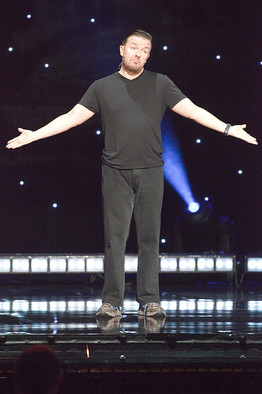 HBORicky Gervais
Ricky Gervais is the writer and star of HBO’s “Ricky Gervais Out of England 2: The Stand-Up Special.” To go to his website click here.

Why don’t you believe in God? I get that question all the time. I always try to give a sensitive, reasoned answer. This is usually awkward, time consuming and pointless. People who believe in God don’t need proof of his existence, and they certainly don’t want evidence to the contrary. They are happy with their belief. They even say things like “it’s true to me” and “it’s faith.” I still give my logical answer because I feel that not being honest would be patronizing and impolite. It is ironic therefore that “I don’t believe in God because there is absolutely no scientific evidence for his existence and from what I’ve heard the very definition is a logical impossibility in this known universe,” comes across as both patronizing and impolite.

[UPDATE: For more from Gervais, go to Does God Exist? Ricky Gervais Takes Your Questions]

Arrogance is another accusation. Which seems particularly unfair. Science seeks the truth. And it does not discriminate. For better or worse it finds things out. Science is humble. It knows what it knows and it knows what it doesn’t know. It bases its conclusions and beliefs on hard evidence -­- evidence that is constantly updated and upgraded. It doesn’t get offended when new facts come along. It embraces the body of knowledge. It doesn’t hold on to medieval practices because they are tradition. If it did, you wouldn’t get a shot of penicillin, you’d pop a leach down your trousers and pray.（所以有很多人不吃藥走去祈禱啊w） Whatever you “believe,” this is not as effective as medicine. Again you can say, “It works for me,” but so do placebos. My point being, I’m saying God doesn’t exist. I’m not saying faith doesn’t exist. I know faith exists. I see it all the time. But believing in something doesn’t make it true. Hoping that something is true doesn’t make it true. The existence of God is not subjective. He either exists or he doesn’t. It’s not a matter of opinion. You can have your own opinions. But you can’t have your own facts.

Why don’t I believe in God? No, no no, why do YOU believe in God? Surely the burden of proof is on the believer. You started all this. If I came up to you and said, “Why don’t you believe I can fly?” You’d say, “Why would I?” I’d reply, “Because it’s a matter of faith.” If I then said, “Prove I can’t fly. Prove I can’t fly see, see, you can’t prove it can you?” You’d probably either walk away, call security or throw me out of the window and shout, ‘’F—ing fly then you lunatic.”

This, is of course a spirituality issue, religion is a different matter. As an atheist, I see nothing “wrong” in believing in a god. I don’t think there is a god, but belief in him does no harm. If it helps you in any way, then that’s fine with me. It’s when belief starts infringing on other people’s rights when it worries me. I would never deny your right to believe in a god. I would just rather you didn’t kill people who believe in a different god, say. Or stone someone to death because your rulebook says their sexuality is immoral. It’s strange that anyone who believes that an all-powerful all-knowing, omniscient power responsible for everything that happens, would also want to judge and punish people for what they are. From what I can gather, pretty much the worst type of person you can be is an atheist. The first four commandments hammer this point home. There is a god, I’m him, no one else is, you’re not as good and don’t forget it. (Don’t murder anyone, doesn’t get a mention till number 6.)

When confronted with anyone who holds my lack of religious faith in such contempt, I say, “It’s the way God made me.”

But what are atheists really being accused of?

The dictionary definition of God is “a supernatural creator and overseer of the universe.” Included in this definition are all deities, goddesses and supernatural beings. Since the beginning of recorded history, which is defined by the invention of writing by the Sumerians around 6,000 years ago, historians have cataloged over 3700 supernatural beings, of which 2870 can be considered deities.

I loved Jesus. He was my hero. More than pop stars. More than footballers. More than God. God was by definition omnipotent and perfect. Jesus was a man. He had to work at it. He had temptation but defeated sin. He had integrity and courage. But He was my hero because He was kind. And He was kind to everyone. He didn’t bow to peer pressure or tyranny or cruelty. He didn’t care who you were. He loved you. What a guy. I wanted to be just like Him.

One day when I was about 8 years old, I was drawing the crucifixion as part of my Bible studies homework. I loved art too. And nature. I loved how God made all the animals. They were also perfect. Unconditionally beautiful. It was an amazing world.

I lived in a very poor, working-class estate in an urban sprawl called Reading, about 40 miles west of London. My father was a laborer and my mother was a housewife. I was never ashamed of poverty. It was almost noble. Also, everyone I knew was in the same situation, and I had everything I needed. School was free. My clothes were cheap and always clean and ironed. And mum was always cooking. She was cooking the day I was drawing on the cross.

I was sitting at the kitchen table when my brother came home. He was 11 years older than me, so he would have been 19. He was as smart as anyone I knew, but he was too cheeky. He would answer back and get into trouble. I was a good boy. I went to church and believed in God -– what a relief for a working-class mother. You see, growing up where I did, mums didn’t hope as high as their kids growing up to be doctors; they just hoped their kids didn’t go to jail. So bring them up believing in God and they’ll be good and law abiding. It’s a perfect system. Well, nearly. 75 percent of Americans are God-­‐fearing Christians; 75 percent of prisoners are God-­‐fearing Christians. 10 percent of Americans are atheists; 0.2 percent of prisoners are atheists.

But anyway, there I was happily drawing my hero when my big brother Bob asked, “Why do you believe in God?” Just a simple question. But my mum panicked. “Bob,” she said in a tone that I knew meant, “Shut up.” Why was that a bad thing to ask? If there was a God and my faith was strong it didn’t matter what people said.

Oh…hang on. There is no God. He knows it, and she knows it deep down. It was as simple as that. I started thinking about it and asking more questions, and within an hour, I was an atheist.

Wow. No God. If mum had lied to me about God, had she also lied to me about Santa? Yes, of course, but who cares? The gifts kept coming. And so did the gifts of my new found atheism. The gifts of truth, science, nature. The real beauty of this world. I learned of evolution -– a theory so simple that only England’s greatest genius could have come up with it. Evolution of plants, animals and us –- with imagination, free will, love, humor. I no longer needed a reason for my existence, just a reason to live. And imagination, free will, love, humor, fun, music, sports, beer and pizza are all good enough reasons for living.
But living an honest life -– for that you need the truth. That’s the other thing I learned that day, that the truth, however shocking or uncomfortable, in the end leads to liberation and dignity.

So what does the question “Why don’t you believe in God?” really mean. I think when someone asks that they are really questioning their own belief. In a way they are asking “what makes you so special? “How come you weren’t brainwashed with the rest of us?” “How dare you say I’m a fool and I’m not going to heaven, f— you!” Let’s be honest, if one person believed in God he would be considered pretty strange. But because it’s a very popular view it’s accepted. And why is it such a popular view? That’s obvious. It’s an attractive proposition. Believe in me and live forever. Again if it was just a case of spirituality this would be fine.

“Do unto others…” is a good rule of thumb. I live by that. Forgiveness is probably the greatest virtue there is. But that’s exactly what it is -­‐ a virtue. Not just a Christian virtue. No one owns being good. I’m good. I just don’t believe I’ll be rewarded for it in heaven. My reward is here and now. It’s knowing that I try to do the right thing. That I lived a good life. And that’s where spirituality really lost its way. When it became a stick to beat people with. “Do this or you’ll burn in hell.”

You won’t burn in hell. But be nice anyway.

You can leave your thoughts about this essay in the comments section.
If you found this article interesting check this out