Warren Buffett, the fourth richest person in the world and the man widely thought to be the greatest investor of the past century, celebrates his birthday Aug. 30.

As well regarded for his folksy wisdom as his monetary acumen, Mr. Buffett has been regaling investors with helpful nuggets of advice for decades. Here are some of Warren Buffet's best investment tips (but be forewarned: the Oracle of Omaha doesn't give out stock picks). 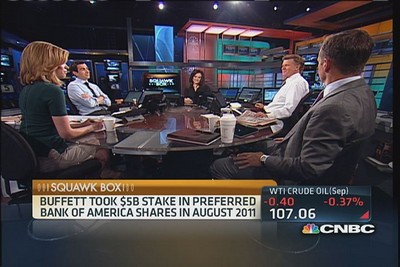 The CEO of Bank of America and billionaire investor Warren Buffett met for dinner in Omaha two weeks ago, reports CNBC's Kayla Tausche with the details.

This is one of Buffett's more famous quotes, and it reflects one of the basic tenets of his investment strategy: He sticks with companies he can fully comprehend, and ones for which the intrinsic value is self-evident, regardless of the current state of their finances. It's a philosophy that has served him well; if he weren't prone to giving vast amounts of his money to charity, Buffett might be the single richest man in the world (and he was, in fact, in 2008, according to Forbes' annual list).

Buffett's interest in moneymaking began early. As a boy growing up in Omaha, Neb., he would sell chewing gum and magazines door to door, and he filed his first tax return at age 14 (marking deductions for his bicycle and watch, used on a paper route). In high school, Buffett and a friend bought a pinball machine and put in a local barber shop; they quickly expanded that enterprise to include several pinball machines around town.

Today, Buffett's personal net worth hovers right around $55 billion and his investment firm, Berkshire Hathaway, owns a number of notable American companies outright, including: GEICO, Dairy Queen, Fruit of the Loom, Helzberg Diamonds, and half of Heinz.

3.'Our approach is very much profiting from lack of change rather than from change. With Wrigley chewing gum, it's the lack of change that appeals to me. I don't think it is going to be hurt by the Internet. That's the kind of business I like.'

A look at Berkshire Hathaway's portfolio bears out this bit of advice: The firm invests primarily in companies that have been around a long time and can be explained in a brief sentence: Dairy Queen sells ice cream, GEICO sells insurance, and so on.

More from the Christian Science Monitor:

Buffett's relationship with GEICO dates back to 1952, when he discovered that one of his investment idols, Benjamin Graham, sat on the company's board. During an attempt to meet Mr. Graham, Buffett had a chance meeting with then-GEICO vice president Lorimer Davidson, and the two became lifelong friends.

4.'I try to buy stock in businesses that are so wonderful that an idiot can run them. Because sooner or later, one will.'

Source: At a panel discussion after the premier of the documentary "I.O.U.S.A" (2008)

5.'The stock market is a no-called-strike game. You don't have to swing at everything – you can wait for your pitch. The problem when you're a money manager is that your fans keep yelling, "Swing, you bum!" '

6.'Price is what you pay; value is what you get. Whether we're talking about socks or stocks, I like buying quality merchandise when it is marked down.'

Buffett's annual letters to Berkshire Hathaway shareholders are highly anticipated; his writings are widely lauded for their effective storytelling and clear, simple language.

7.'Never count on making a good sale. Have the purchase price be so attractive that even a mediocre sale gives good results.'

Source: "Buffett: The Making of an American Capitalist" (1995)

8.'If you understood a business perfectly and the future of the business, you would need very little in the way of a margin of safety.'

So, the more vulnerable the business is, assuming you still want to invest in it, the larger margin of safety you'd need. If you're driving a truck across a bridge that says it holds 10,000 pounds and you've got a 9,800 pound vehicle, if the bridge is 6 inches above the crevice it covers, you may feel okay, but if it's over the Grand Canyon, you may feel you want a little larger margin of safety.'

Berkshire Hathaway's annual meetings, commonly referred to as "Buffett Woodstock," have become can't-miss events in the financial world. Last May, 35,000 people descended on Omaha, Neb. for the weekend-long convention celebrating all things Buffett. The Oracle himself fields questions from investors and journalists, hobnobs with luminaries ranging from Bill Gates to NFL players, and sometimes plays a game or two of ping pong.

9.'We've long felt that the only value of stock forecasters isto make fortune tellers look good. Even now, Charlie [Munger] and I continue to believe that short-term market forecasts are poison and should be kept locked up in a safe place, away from children and also from grown-ups who behave in the market like children.'

Charlie Munger is Buffett's longtime business partner and the vice chairman of Berkshire Hathaway, He's a fellow Omaha, Neb. native who also serves as the director of wholesaler Costco. The two have their differences: Mr. Munger is a known Republican, while Buffett has become known in recent years for supporting Democrats and democratic ideas.

10.'We don't get paid for activity, just for being right. As tohow long we'll wait, we'll wait indefinitely.'